Nanowrimo is just three days away. The excitement is filling the air. Writers and aspiring authors would be preparing the outlines of their novels. Being a writer and an author myself, I thought of sharing with writers and readers of the world a little plan I made to assist you in creating chapter outlines for your novels.

As a writer, you would have an idea of how to write your novel. Your novel will have the following elements. There are many more elements but I am narrowing it down to the following five:

Creating Chapter Outlines:
While you would need to have an outline of your entire story to help you write better, you would also need to have outlines for each chapter. This will let you follow a clear path of story progression from the beginning until the end. I have devised an easy way of creating chapter outlines which I am also following for this year’s Nanowrimo. Here it is:

For each chapter, fill in the following parts:

2. Chapter Name:
Write the name of the chapter

4. How it begins:
Write down a few lines of how the chapter would begin

5. How it ends:
Write down a few lines of how it ends

6. Other details:
In this section, write in bullet points what else you want to include in the chapter which will become the middle part of the chapter and will create a link with the chapter’s beginning with its end

Why write the beginning, middle and “other details”?

Writing the beginning and ending will give you a sense of direction for each chapter. When you begin the chapter you connect it with the previous one and when you end a chapter, you end it with a question, a mystery or a cliffhanger, which includes a character’s pledge, foreshadowing, demand for action, a statement that creates curiosity, or a provocative question. 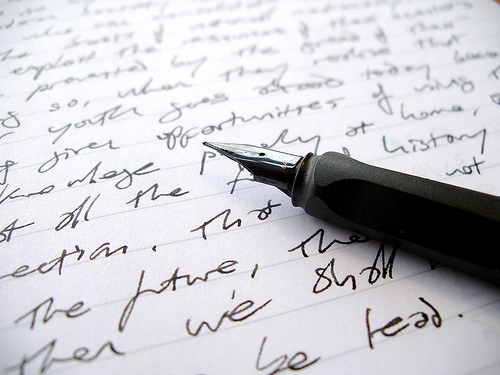 Writing an opinion piece or an op-ed (opposite the editorial page) is a challenge, however, with research and a flair to write, you can end up writing a fact-based and opinion-oriented article for a daily newspaper. Given below are a few important steps that you will find useful when writing an opinion piece. These tips are relevant for both print media writers and bloggers.

1.  You must have a flair to write to begin with

2. Your article will have more value if you possess a good vocabulary

3. Keep an eye on national and international events

5. Write the article based on what you want to read

6. Do not induce your opinion but inform the readers with it

7. Use direct and indirect quotes of key people having national and international importance

8. Edit and proofread it thoroughly

This article has also appeared at: www.wikihow.com/Write-an-Opinion-Column-for-a-Daily-Newspaper

Any short story, novella or novel must have a beginning, middle and an end. A beginning is a part where the author introduces the story to the readers. It is in this part where the characters are revealed, the setting and plot becomes evident and the theme is established. During the middle part of the story, the characters develop, entwine in the life of other characters and their own subplots emerge. During the middle, the author puts in the rising action and the conflict. This conflict creates tension in the plot as the protagonist and the antagonist and other supporting characters begin to evolve further. Also in the middle is the plot twist, which can bewilder the reader. By the end of the middle part, the conflict becomes thin and the protagonist resolves the conflict. The end of the story/novel shows how the conflict ends or in some cases, how another conflict begins that predicts the arrival of a sequel to the short story/novella/novel.

During the middle part of the story, the characters develop, entwine in the life of other characters and their own subplots emerge. During the middle, the author puts in the rising action and the conflict. This conflict creates tension in the plot as the protagonist and the antagonist and other supporting characters begin to evolve further. Also in the middle is the plot twist, which can bewilder the reader. By the end of the middle part, the conflict becomes thin and the protagonist resolves the conflict. The end of the story/novel shows how the conflict ends or in some cases, how another conflict begins that predicts the arrival of a sequel to the short story/novella/novel.

The beginning, middle, and end of a short story/novel will be discussed in detail on this future in the future.

The subject must always perform an action:
The subject voice performs an action in the active voice.

For example:
Active voice sentence:
The girl is singing a song.
Here “girl” is the subject while “song” is the object. The message is clear and direct as it explicitly mentions who is doing what.

Verbs must follow the subject:
In an active voice sentence, the verb appears soon after the subject.

For example:
The boy is watching television.
Here, the “boy’ is the subject while “watching” is the verb. The sentence is informing the readers that subject is doing something and the verb appears right after the subject.
Passive voice sentence:
However, when writing the same sentence in the passive voice, the sentence will become: The television is being watched by the boy. In this case, the reader’s will keep questioning what is the purpose of the television until they read that someone is watching it. Here again, the passive voice of the sentence is unclear and remains indirect in its narrative.

When writing articles, essay, write-ups or letters, it is imperative for you to write them in the active voice so the readers’ can read it in a smooth flow. Writing in active voice will also keep your writing clear and direct without creating any confusion over the subject’s action and the object’s presence.

If writing lets you touch other’s soul, then reading allows you to touch yours. The habit of reading is that blessed pastime and passion that lets you travel in a world created by the author. Reading is life, that is what I always emphasize. Emerging and young writers often ask me the secrets of becoming a good writer. My reply to all of them is to read as much as you can. If practice makes a man perfect, then reading makes a writer perfect in expression and style, sentence structure, grammar and tense usage.

Your mind attunes with the author’s or writer’s expression and style, allowing you to understand which style you should follow. Although a writer or author’s signature style differentiates them from the rest, it is evident that during the early or rookie years, a writer’s expression is adapted from another writer. Over the years, and after writing much, the writer develops his/her own style that becomes the signature style.

To develop your writing skills and sentence structure, it is imperative for you to read the editorials and opinion articles of English-language newspapers. These two write-ups and especially the editorial are written with facts, sharing the writer’s opinion, by using clear and concise vocabulary discussing the topic in discussion with short sentences that stay focused over the topic. Reading opinion articles is also a must to improve your writing since such articles state the writer’s opinion over a topic in his/her own style, helping you to develop yours.

Reading daily news also lets you develop a sense of how to articulate your facts and messages in your write-up with minimal words and maximum impact. Similarly, to become a good writer reading books – fiction, non-fiction – is important. While reading, the mind subconsciously and more than often consciously retains certain words, sentences and the author’s expression that surface when you are writing, helping to use it in your writing for value addition. Moreover, reading gives your mind the wings to fly into the world of literature where the sentences and the author’s message become the foundation on which you can build your writing empire.

If you aim at becoming a good writer, then develop a habit of reading every book, magazine, newspaper, print and online publication you can get hold of. Reader’s Digest, TIME, and Foreign Policy are my personal favorite magazines for their articles are written with the perfect vocabulary whereby discussing maximum facts with minimum words. From Pakistan, the editorial and opinion articles along with international news of all leading English-language newspapers is a must.

Reading is a two-way tool. One, it lets you develop your writing style, broadens your mind with vivid imagination and facts, and second, it is a source of research. And as every writer’s goal is to write well-researched articles, therefore, reading becomes a writer’s best friend.

I hope these tips will help you become a good writer.